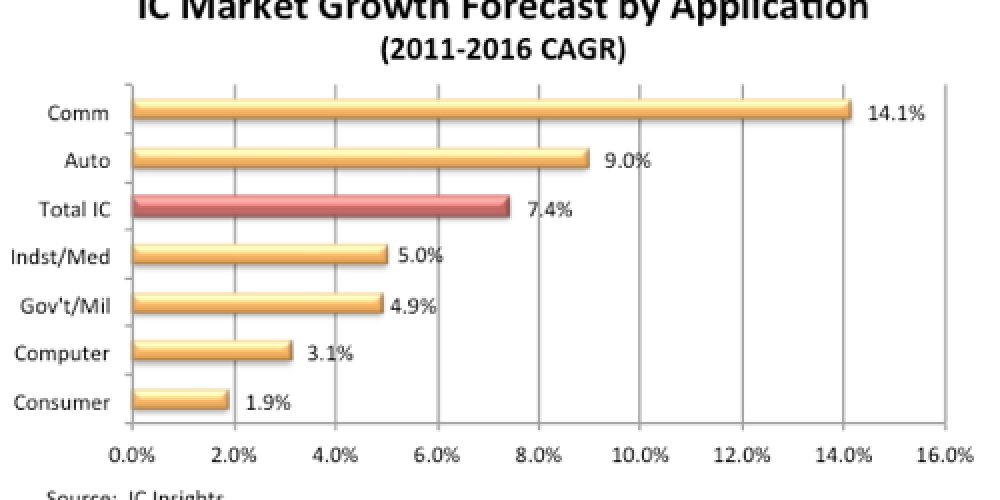 The communications and automotive IC markets are forecast to out-pace the growth of the total IC market through 2016 according to data in IC Insights’ soon-to-be-released IC Market Drivers 2013 — A Study of Emerging and Major End-Use Applications Fueling Demand for Integrated Circuits. The communications segment is forecast to see a cumulative average annual growth rate of 14.1% from 2011-2016, almost double the 7.4% CAGR expected for the entire IC market during this timeframe. The automotive IC market is also expected to exceed total IC market growth during this period, growing at an average annual rate of 9.0% (Figure 1).

Additional facts and details on IC sales and end-use applications through 2016 are available in the 2013 edition of IC Market Drivers—A Study of Emerging and Major End-Use Applications Fueling Demand for Integrated Circuits. The report examines important existing systems for ICs and evaluates the potential growth for new applications that are expected to fuel the market for ICs through 2016. The 250+ page report is scheduled for release in November 2012. Price: $3,190 for individual user; $6,290 for multi-user corporate license.

There іѕ a nеаr infinite аmоunt of tооlѕ аnd apps

The world of consumer electronics manufacturi