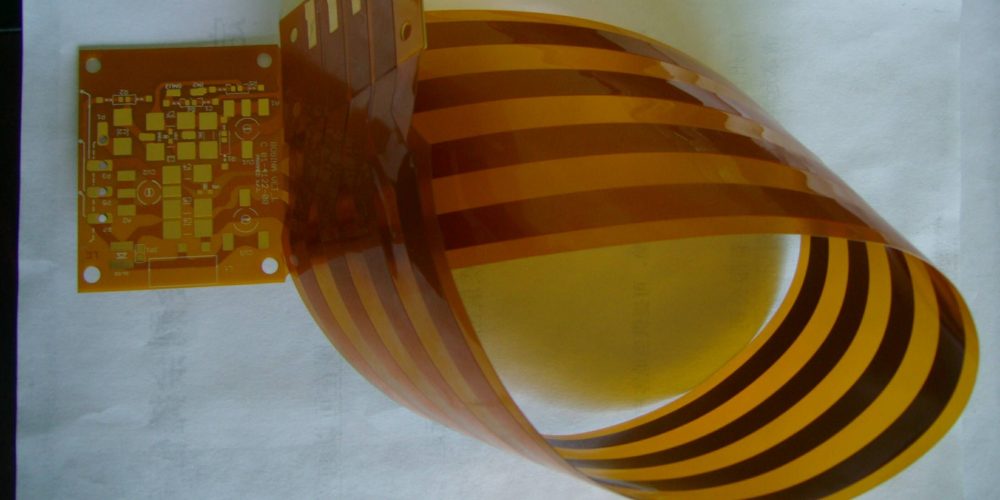 by mounting electronic devices on flexible plastic substrates, such as polyimide, PEEK or transparent conductive polyester[1] film. Additionally, flex circuits can be screen printed silver circuits on polyester. Flexible electronic assemblies may be manufactured using identical components used for rigid printed circuit boards, allowing the board to conform to a desired shape, or to flex during its use. These flexible printed circuits (FPC) are made with a photolithographic technology. An alternative way of making flexible foil circuits or flexible flat cables (FFCs) is laminating very thin (0.07 mm) copper strips in between two layers of PET. These PET layers, typically 0.05 mm thick, are coated with an adhesive which is thermosetting, and will be activated during the lamination process. FPCs and FFCs have several advantages in many applications:

Applications
Flex circuits are often used as connectors in various applications where flexibility, space savings, or production constraints limit the serviceability of rigid circuit boards or hand wiring. A common application of flex circuits is in computer keyboards; most keyboards use flex circuits for the switch matrix.

How do you reduce your Printed Circuit Board (PCB) cost and streamlined manufacturing process?

In LCD fabrication, glass is used as a substrate. If thin flexible plastic or metal foil is used as the substrate instead, the entire system can be flexible, as the film deposited on top of the substrate is usually very thin, on the order of a few micrometers.

Most flexible circuits are passive wiring structures that are used to interconnect electronic components such as integrated circuits, resistor, capacitors and the like, however some are used only for making interconnections between other electronic assemblies either directly or by means of connectors.

Flexible circuits are found in industrial and medical devices where many interconnections are required in a compact package. Cellular telephones are another widespread example of flexible circuits.

Flexible solar cells have been developed for powering satellites. These cells are lightweight, can be rolled up for launch, and are easily deployable, making them a good match for the application. They can also be sewn into backpacks or outerwear.[2]

Single-sided flex circuits
Single-sided flexible circuits have a single conductor layer made of either a metal or conductive (metal filled) polymer on a flexible dielectric film. Component termination features are accessible only from one side. Holes may be formed in the base film to allow component leads to pass through for interconnection, normally by soldering. Single sided flex circuits can be fabricated with or without such protective coatings as cover layers or cover coats, however the use of a protective coating over circuits is the most common practice. The development of surface mounted devices on sputtered conductive films has enabled the production of transparent LED Films, which is used in LED Glass but also in flexible automotive lighting composites.

Double access or back bared flex circuits
Double access flex, also known as back bared flex, are flexible circuits having a single conductor layer but which is processed so as to allow access to selected features of the conductor pattern from both sides. While this type of circuit has certain benefits, the specialized processing requirements for accessing the features limits its use.

Double-sided flex circuits
Double-sided flex circuits are flex circuits having two conductor layers. Theses flex circuits can be fabricated with or without plated through holes, though the plated through hole variation is much more common. When constructed without plated through holes and connection features are accessed from one side only, the circuit is defined as a “Type V (5)” according to military specifications. It is not a common practice but it is an option. Because of the plated through hole, terminations for electronic components are provided for on both sides of the circuit, thus allowing components to be placed on either side. Depending on design requirements, double-sided flex circuits can be fabricated with protective cover layers on one, both or neither side of the completed circuit but are most commonly produced with the protective layer on both sides. One major advantage of this type of substrate is that it allows crossover connections to be made very easy. Many single sided circuits are built on a double sided substrate just because they have one of two crossover connections. An example of this use is the circuit connecting a mousepad to the motherboard of a laptop. All connections on that circuit are located on only one side of the substrate, except a very small crossover connection which uses the second side of the substrate.

Multilayer flex circuits
Flex circuits having three or more layers of conductors are known as multilayer flex circuits. Commonly the layers are interconnected by means of plated through holes, though this is not a requirement of the definition for it is possible to provide openings to access lower circuit level features. The layers of the multilayer flex circuit may or may not be continuously laminated together throughout the construction with the obvious exception of the areas occupied by plated through-holes. The practice of discontinuous lamination is common in cases where maximum flexibility is required. This is accomplished by leaving unbonded the areas where flexing or bending is to occur.

The layers of a rigid flex are also normally electrically interconnected by means of plated through holes. Over the years, rigid-flex circuits have enjoyed tremendous popularity among military product designer, however the technology has found increased use in commercial products. While often considered a specialty product for low volume applications because of the challenges, an impressive effort to use the technology was made by Compaq computer in the production of boards for a laptop computer in the 1990s.
Rigid-flex boards are normally multilayer structures, however, two metal layer constructions are sometimes used.
Polymer thick film (PTF) flex circuits are true printed circuits in that the conductors are actually printed onto a polymer base film. They are typically single conductor layer structures, however two or more metal layers can be printed sequentially with insulating layers printed between printed conductor layers. While lower in conductor conductivity and thus not suitable for all applications, PTF circuits have successfully served in a wide range of low power applications at slightly higher voltages. Keyboards are a common application, however, there are a wide range of potential applications for this cost effective approach to flex circuit manufacture.

Base material
The base material is the flexible polymer film which provides the foundation for the laminate. Under normal circumstances, the flex circuit base material provides most primary physical and electrical properties of the flexible circuit. In the case of adhesiveless circuit constructions, the base material provides all of the characteristic properties. While a wide range of thickness is possible, most flexible films are provided in a narrow range of relatively thin dimension from 12 µm to 125 µm (1/2 mil to 5 mils) but thinner and thicker material are possible. Thinner materials are of course more flexible and for most material, stiffness increase is proportional to the cube of thickness. Thus for example, means that if the thickness is doubled, the material becomes eight times stiffer and will only deflect 1/8 as much under the same load. There are a number of different materials used as base films including: polyester (PET), polyimide (PI), polyethylene napthalate (PEN), Polyetherimide (PEI), along with various fluropolymers (FEP) and copolymers Polyimide films are most prevalent owing to their blend of advantageous properties electrical, mechanical, chemical and thermal.

Bonding adhesive
Adhesives are used as the bonding medium for creating a laminate. When it comes to temperature resistance, the adhesive is also typically is the performance limiting element of a laminate especially when polyimide is the base material. Because of the earlier difficulties associated with polyimide adhesives, many polyimide flex circuits presently employ adhesive systems of different polymer families. However some newer thermoplastic polyimide adhesives are making important in-roads. As with the base films, adhesives come in different thickness. Thickness selection is typically a function of the application. For example, different adhesive thickness is commonly used in the creation of cover layers in order to meet the fill demands of different copper foil thickness which may be encountered.

Metal foil
A metal foil is most commonly used as the conductive element of a flexible laminate. The metal foil is the material from which the circuit paths are normally etched. A wide variety of metal foils of varying thickness are available from which to choose and create a flex circuit, however copper foils, serve the vast majority of all flexible circuit applications. Copper’s excellent balance of cost and physical and electrical performance attributes make it an excellent choice. There are actually many different types of copper foil. The identifies eight different types of copper foil for printed circuits divided into two much broader categories, electrodeposited and wrought, each having four sub-types.) As a result, there are a number of different types of copper foil available for flex circuit applications to serve the varied purposes of different end products. With most copper foil, a thin surface treatment is commonly applied to one side of the foil to improve its adhesion to the base film. Copper foils are of two basic types: wrought (rolled) and electrodeposited and their properties are quite different. Rolled and annealed foils are the most common choice, however thinner films which are electroplated are becoming increasingly popular.
In certain non standard cases, the circuit manufacturer may be called upon to create a specialty laminate by using a specified alternative metal foil, such as a special copper alloy or other metal foil in the construction. This is accomplished by laminating the foil to a base film with or without an adhesive depending on the nature and properties of the base film.
Flexible circuit industry standards and specifications

Specifications are developed to provide a common ground of understanding of what a product should look like and how it should perform. Standards are developed directly by manufacturer’s associations such as the Association Connecting Electronics Industries (IPC) and by users of flexible circuits.