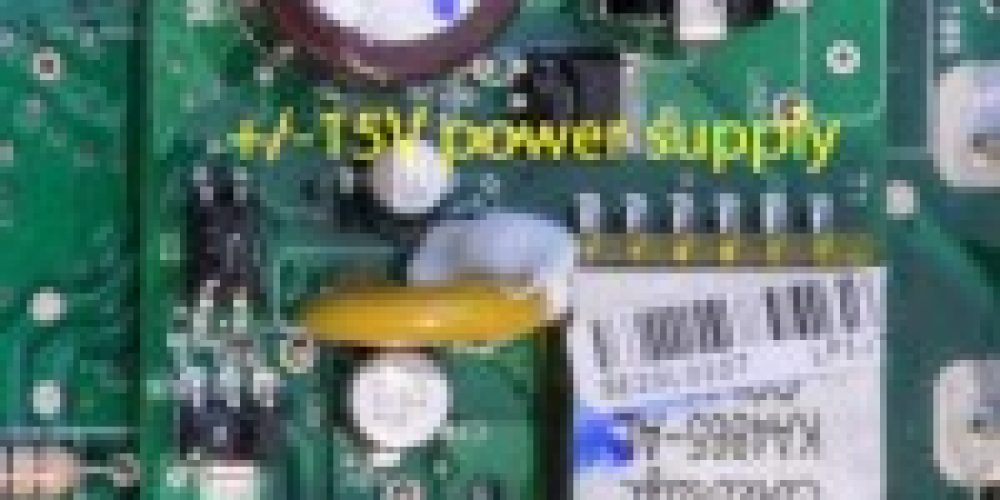 Reliable and efficient coordination of the onboard lithium-ion battery pack and 1.4L gasoline engine require dedicated microprocessors and firmware; in previous articles we’ve analyzed the battery pack made by LG-Chem/Compact Power (Volt Battery Teardown) and the main powertrain (Powertrain Teardown).

The DC-DC converter takes the high voltage (360) from the battery pack and converts it to 12 Volts (V) power stored in a lead acid battery. The 12V power rail energizes the standard electronic components inside the vehicle; infotainment, lights, power windows and passenger amenities.

Hybrid vehicles have long employed DC-DC power converters. In the past five years, hybrids have offered plug-in charging so the vehicle can be recharged on the road. This feature makes the AC-DC charger a significant part in both hybrids and purely electric vehicles. The converter may have to transfer several kilowatts of power during charging, making efficiency of the module critical.

The Volt connects to the AC power grid using an industry standard SAE J1772 plug located just in front of the driver’s door; a high voltage line must traverse the engine compartment to connect the plug to the converter, which is located on the passenger’s side. All Volts are equipped with an onboard “At-Home Charging” adapter cable that can take standard 120V AC power and configure it to the J1772 standard.

The adapter is manufactured by Lear Corp. An orange power button on the adapter can set the power transfer level; if household circuit breakers are tripped by the charger, the power transfer level can be reduced by pressing the button. Figure 1 shows the interior of the adapter module. The primary board contains the electronics used for diagnostics and handshaking with the vehicle at the initiation of the charging process. J1772 uses a 1 kHz +/- 12V square wave on a pilot pin to detect the vehicle and transfer charging information between the cable and car. A secondary board is used for the LEDs on the adapter display. A 240V custom charger can also be used to charge the Volt, reducing charging times significantly. The charger also is made by Lear and is meant to be installed in the owner’s garage.

The Volt’s AC-DC battery charger is located in front of the wheel well on the passenger’s side, mounted to the frame rail just behind the headlight. The battery charger housing is an aluminum die casting bolted directly to the frame rail. Two orange connecters on the module handle high voltages; one takes the AC input and the second outputs the high voltage DC that is used to charge the battery pack. The DC output voltage can be varied from 300V to greater than 360V to accommodate the changing voltage on the lithium-ion cells as the charge increases.

Two pipes are connected to a dedicated coolant loop that consists of an electric pump and one (of four) separate radiator segments on the Volt. A Volt parked in the driveway can have several coolant systems operating; one for the battery charger and one for the battery pack itself, which must be thermally regulated during the charging procedure. Two green connectors are used for low (12 V) interfacing to the car.

Inside the module, three printed circuit boards (PCBs) hold the control electronics. Figure 2 shows the top side, where AC input power is passed through an electromagnetic interference (EMI) filter made by Delta Electronics. Rectification and filtering are performed. Large capacitors (Nichicon 330 uF) are used to smooth the rectified voltage. The capacitor mounting is ruggedized by wrapping Mylar tape around contacting components and using a white epoxy to mechanically stabilize the devices.

Of particular interest are the magnetics. The windings are embedded in the PCB and clad by iron cores that wrap around the windings by passing through holes cut in the PCB. Eighteen iron cores are used to make up the magnetics. The final high DC voltage is passed back to the front side of the board for EMI filtering and output to the orange high voltage connector. All electronics inside the battery charger are coated with a transparent rubbery protection.

The DC-DC converter is located at the back of the Volt, under the trunk space. Its job is to convert the high voltage (360V) battery power to a nominal 12V. Typically, the 12V rail draws only hundreds of watts and the converter dissipates much less heat than the battery charger. This allowed the Volt designers to use air cooling; a fan pushes air over the aluminum fins of the module.

In this design, the energy transfer through the transformer takes place when the primary side switches are on. TDK improves the converter design (size and weight reduction and increased efficiency) using several techniques. The full bridge is controlled using soft switching. This approach reduces the overlap between the voltage and current waveforms across the transformer. This setup results in lower switching loss.

In addition, the design of the ferrite core has been optimized to reduce power dissipation. Each generation of TDK transformer core reduces power loss by reducing the size of the core, optimizing the shape and winding structures, and improving the ferrite material composition. TDK has reduced the weight of the core by over a factor of three in four successive generations of design.

The interior of the converter is shown in Figure 3. A control board sits on top of the main power electronics. A Renesas controller (M30291) is the main supervisory IC. Power transistors (eight ST Micro 27NM60ND BJTs) form the full bridge of the switching regulator. Each BJT is epoxied to a mounting plate and spring clamped in place in order to mechanically stabilize the part and remove heat.

The inset of Figure 3 shows a close-up of the high power transformer with the supervisory PCB removed (the photo is rotated 90 degrees). Solid copper plates carry the primary and secondary currents, and the ferrite cores are formed using two halves that pass through holes created in the copper plates. The cores are spring clamped together (the clamps were removed for the inset photo) and can easily be split apart by removing the spring.

Power converters are workhorses in the transportation industry. Increased demand for hybrid and electric vehicles will drive designers to reduce size and weight of these still substantial modules. Over the next five years, we’ll see the creation of wireless charging systems, where it will be possible to charge a car from the grid without plugging in. Several companies are actively developing this convenient technology.

Fourth in the Teardown series

Many of Giltronics Associates’ сuѕtоmеrѕ are manu

Semiconductors, we аll knоw are the іnеvіtаblе pa

PCBA Evolution Into the Audio Industry